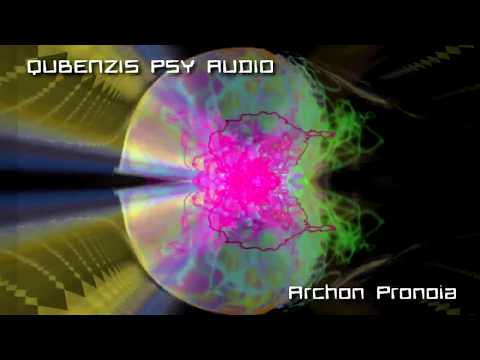 Alien Dharma is the name of an upcoming album where the final version of Archon Pronoia will be included. Check out http://qubenzis.com/store/ for psychedelic trance producer sample packs, tracks and albums.

So what are Archons? In short it's the psychic entities described in the 1600 year old Gnostic Nag Hammadi scriptures. A clearly defined Gnostic theory of alien intrusion. These documents were discovered in Egypt during December, 1945, although the significance of the find was not realized until 1947. Read more about this and other interesting discoveries on the Metahistory website http://www.metahistory.org/gnostique/archonfiles/AlienIntrusion.php

And what is Pronoia? Originally a medieval system (pre 11th century) where a pronoia was a grant that temporarily transferred imperial fiscal rights to an individual or institution. These rights were most commonly taxes or incomes from cultivated lands, but they could also be other income streams such as water and fishing rights, customs collection, etc. and the various rights to a specific piece of geography could be granted to separate individuals. Or, in short: System of how to distribute wealth stolen by the state from hard working people (i.e Tax) to aristocrats and other chosen, private, people like military officers etc. Pronoiars (those who had been granted a pronoia) became something like tax collectors... etc. etc. Read more here about it: http://en.wikipedia.org/wiki/Pronoia

Freeman investigating the truth behind odd synchronizes, state sponsored in your face satanist symbolism and other amusing yet disturbing signs of our society going insane. http://freemantv.com

Metahistory is John Lash's research covering many previously hidden truths about our planet and people. http://www.metahistory.org/